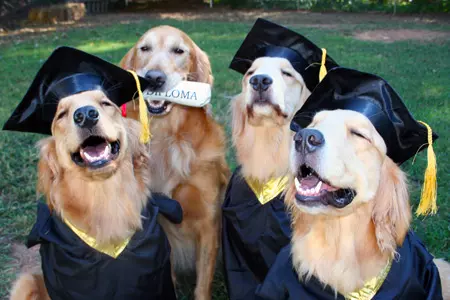 A while back I wrote an article about a bleakly American Wikipedia page (“List of federal political sex scandals in the United States”), which started as delightfully anodyne – he may have been gay! He loved a black woman! – and ended up with a lot of sexual assaults and a suicide. Sorry about that. It took a turn I did not expect, and I wasn’t about to toss the whole thing (I am not a very diligent editor). As you can tell by the title here, it is unlikely we run into such a macabre conclusion this time. ANIMALS WITH FRAUDULENT DIPLOMAS!

Before we dive in, let’s consider the pretext for this article more closely – are we to understand there are animals out there with LEGITIMATE diplomas? Where is THAT list? I imagine it’s the hypothetical monkey who eventually tapped out Shakespeare on a typewriter after an infinite time frame and that painting elephant with an honorary art degree. Alas, there is a trend you will soon see.

Colby Nolan: Colby Nolan was a six-year old house cat who was awarded an MBA in 2004 by the illustrious Trinity Southern University. Are you unfamiliar with Trinity Southern? It’s probably because it was a Dallas-based diploma mill that would send you a diploma for $299.00. Colby’s owner, a Pennsylvania deputy attorney general, sent a resume stating Colby – who is a cat by the way, let’s not forget that critical detail – had taken classes at a local community college, worked at McDonalds, babysat and maintained a newspaper route. This cat is out there trying to provide for his family. Trinity responded due to the lack of experience, they would need another $100.00 to process his degree. Lo and behold! Colby got an MBA. Trinity was subsequently sued into oblivion. THIS CAT EARNED HIS DEGREE DAMNIT.

George: George is a cat owned by BBC host Chris Jackson who wanted to prove the illegitimacy of hypnotherapy. Jackson got his cat registered with the British Board of Neuro Linguistic Programming, the United Fellowship of Hypnotherapists and the Professional Hypnotherapy Practitioner Association, thus securing George’s licensed accreditation as a hypnotherapist. I would still let George tell me my future.

Henrietta: Another house cat owned by a journalist with a vendetta, Henrietta obtained a diploma from the American Association of Nutritional Consultants. Upon being accepted, her owner responded it was an honor that would have to be award posthumously as the cat had passed away. I SWEAR THIS IS AS SAD AS THIS GETS.

Kitty O’Malley: Obviously another cat (she is also identified as Spanky, which is a WAY better name), this one obtained a high school diploma from Washington High Academy in Florida. Kitty/Spanky then applied to multiple local colleges, none of which accept her. I am as shocked as you she did not get into Florida State, where she could have majored in prescription forgery, insurance fraud, or aluminum-siding resale.

Oreo C Collins: A cat who “graduated” from an online high school, despite later admitting she had to lie about her age in order to qualify. Oreo was heading an investigation by the Better Business Bureau.

Zoe D Katze: Cat owners really ride hard for puns while naming their pets. This German cat also obtained multiple hypnotherapy certifications after her snitch of an owner followed a vendetta against palm readers and tarot card readers. Get a hobby nerd.

Lulu: In 2010, a class action was underway against Virgin Islands’ Concordia College for defrauding “students” with bogus degrees. Mark Howard, one of the attorneys for the claimants, used his dog Lulu as evidence of the illegitimacy of the college. In court, Lulu had “graduated” with a better GPA than one of the key defendant witnesses. This is the academic equivalent of the kid who was benched on his high school basketball team in order to open up playing time for Air Bud.

Molly: In 2012, a Houston news team got a degree from a local diploma mill for a photographer’s basset hound after sending a $300.00 check and completing a “laughably easy take-home test”. This news team could have just completed the take-home test on their own to show how easy it was, but a wise producer managed to shoe horn a dog into the story, and here we are, talking about it six years later. That is a producer who is good at their job.

Pete: The American University of London offered a four-year lurcher (basically an off-brand wolfhound) an MBA for $4,500.00 despite making up all his work experience and an undergrad degree from a fictitious undergraduate program. Pete managed to get his MBA just four days after applying. Good boy, Pete.

Sassafras Herbert: FINALLY someone who knows how to name a dog! Sassafras got a diploma for $50.00 from the American Association of Nutrition and Dietary Consultants. Let the free market settle which degrees are fake and which are real, I always say.

Sonny: Sonny got a medical degree, excuse me – A FUCKING MEDICAL DEGREE – from Ashwood University after listing work experience of “significant proctology experience sniffing other dogs’ bums.” That’s just A+ comedy writing guys. That’s better than you’ll get on this internet backwater of a site.

Wally:  Wally received an associate degree in childhood development from Almeda University in 2004 after claiming to “play with kids every day… teaching them to interact better with each other… teaching them responsibilities like feeding the dog.” Almeda University returned fire, claiming Wally’s owner had committed perjury by creating a false identity using a fabricated name and date of birth, thus illustrating Almeda University’s lack of understand about the concept of perjury. Wally was born to be a star, because he went on to be featured in a Wisconsin mayoral campaign with a dialogue bubble “I graduated with [mayoral opponent] Bill Chesen”, referencing the candidates phony Almeda University bachelor’s degree. Wally is better at political satire than any other writer, dead or alive.

Ollie: Mike Daube, a public health expert in Western Australia, used his dog to promote a list of made-up credentials like “past associate of the Senton Park Institute for Canine Refuge Studies”, which was the pound where Daube had rescued Ollie. Multiple predatory journals accepted her application as a member, with the Global Journal of Addiction and Rehabilitation Medicine naming her an associate editor. Jesus guys, get it together, you aren’t even TRYING anymore.

Maxwell Sniffingwell: HELL YES this is the good stuff. Pompous British name by someone who clearly has never been out of the tri-state area? Big ol’ checkmark. An Arkansas veterinarian submitted an application to Belford University on behalf of his English bulldog based on his work as a reproductive specialist (NICE), noting his natural ability in theriogeneology (basically animal husbandry, or “pet-fucking” for the less initiated). The application was accepted with a payment of $549.00.

I don’t know about you guys, but I’m about to pet my dog and pad my resume. Au revoir!