For those of you who voted in the 1984 presidential election, when you get to the pearly gates, I highly encourage you to tell lead bouncer and all-around-good-guy Saint Peter that you lived somewhere other than Minnesota or D.C. 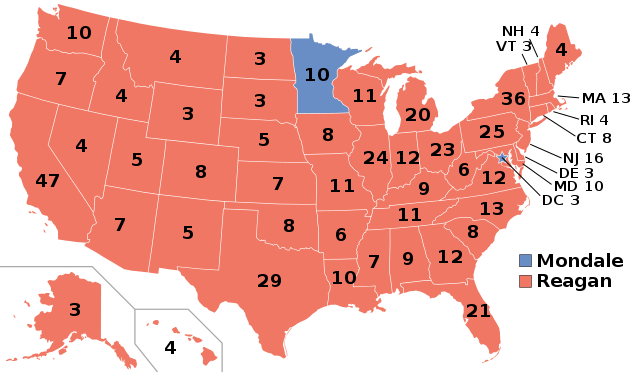 From Wikipedia, “Reagan ran for reelection as President in 1984, running against Democrat Walter Mondale. Reagan was re-elected, receiving 58.8% of the popular vote to Mondale’s 40.6%, and winning 49 of 50 states. Reagan won a record 525 electoral votes (97.6% of the 538 votes in the Electoral College), the most by any candidate in American history. This was the second-most lopsided presidential election in modern U.S. history after Franklin D. Roosevelt’s 1936 victory over Alfred M. Landon, in which he won 98.5% or 523 of the (then-total) 531 electoral votes. At 73 years old, Reagan again became the oldest person elected to the presidency, breaking his own record in 1980.”