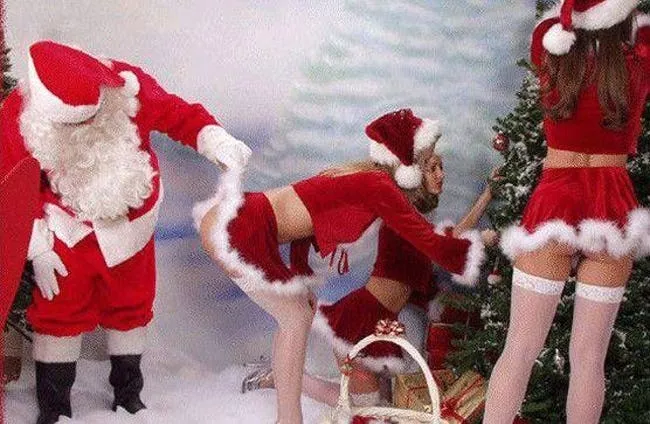 This being the year 2018 of our Lord Ronald Reagan, we all must be outraged, constantly, about everything. The best part is being unable to tell if this outrage is sincere or just part of the endless charade everyone has to partake in as part of their digital existence as we all waste our finite time on this planet with unimportant nonsense until we all die. This has become such a prevalent experience there is now Poe’s law, which states “without a clear indicator of the author’s intent, it is impossible to create a parody of extreme views so obviously exaggerated that it cannot be mistaken by some readers for a sincere expression of the parodied views.”

A great instance of this is “Baby It’s Cold Outside,” the timeless classic by Dean Martin and some other unimportant broad (okay maybe they have a point about this one). Last year, I heard rumbles about how this song is indicative of the patriarchy and rape culture. I figured this was some good ol’ fashioned shitposting about a song that is definitely skeevy, but otherwise pretty innocuous. This has been one of my favorite Christmas songs for most of my adult life as it is easily the least annoying, and who doesn’t like America’s drunk uncle Dean Martin?! The closer you look at the lyrics (“say what’s in this drink?” and “the answer is no”), okay, fair, this song is pretty leering and dated but IT STILL BANGS!

I will concede Dean Martin is inappropriate in this song, but c’mon, that’s the whole appeal of Dean Martin who almost certainly would have been #MeToo’d had he been kicking around a few decades later. But now we are upset with “Rudolph the Red-nosed Reindeer” because it endorses bullying. First, ITS THE WHOLE PREMISE OF THE SONG – the other reindeer give Rudolph shit for being different, but his difference makes him standout and eventually save the day! Are we outlawing fables with happy endings now? TIME’S UP FOR YOU AESOP FABLES, YOU ABLEIST SHITHEEL! Second, and actually unrelated but did you know all Santa’s reindeer are female? Male reindeer shed their antlers during winter while female retain theirs – get your house in order ladies! Third, and also unrelated, but in the claymation Rudolph movie, the Abominable Snowman (seen below) absolutely scared the shit out of me as a child. I feel like you all should know this. Look at this terrifying fuck.

If we can mad over the positive message in Rudolph, we can find issue with literally any Christmas song. In what is sure to be a challenging affair, we will identify issues in other popular Christmas songs so you can be plenty juiced up with moral indignity this season:

“Santa Baby”: Endorses prostitution/sex work and reinforces female dependency on men – Eartha Kitt clearly is looking for a quid pro quo exchange of sex for presents. And that’s fine! Unless it isn’t. Us of the internet outrage mob are unsure of how to feel about sex work if it is of the woman’s own volition. Even if we are okay with this exchange, women should not be reliant on an obese white sugar daddy to get what they want (ESPECIALLY a black woman). Ms Kitt should be singing about equal pay and opportunity for women instead. BANNED.

“It’s Beginning to Look a Lot Like Christmas”: Reinforces outdated gender norms – Barney and Ben get hop-a-long boots and a pistol that shoots while Janice and Jen get dolls that’ll talk and will go for a walk. Not in my America! BANNED. (Additional points of outrage – Mom and Dad can hardly wait for school to start again – this is suggestive of negligent parents, or possibly even of deadbeat parents, and discriminates against parents of home schooled children. DOUBLE BANNED!)

“Grandma Got Run Over by a Reindeer”: Ageist. The song mentions Grandma forgot her medication before going outside to walk home. Where are her children? Where are her grandchildren? Hopefully being detained by the local authorities for their disregard of the well-being of their confused elderly grandmother who they let wander around outside by herself in the snow at night. This song also reinforces the patriarchy – no one is upset grandma was killed; in fact, grandpa has “been taking this so well, see him in there watching football, drinking beer and playing cards with cousin Mel.” Not only did they let this woman die, but they are perfectly content with the result. BANNED AND CHARGED WITH CRIMINAL NEGLIGENCE.

“Let It Snow”: Reductive of the homeless experience. “The weather outside if frightful, but the fire is so delightful, and since we’ve no place to go” and “how I’ll hate going out in the storm” discounts residentially-challenged individuals. Oh, you’ll be warm if I hold you tight? MUST BE NICE ASSHOLE. BANNED.

“Twelve Days of Christmas”: Encourages vapid consumerism. Does the true love in this song need FIVE gold rings? In THIS economy? This is a gross display of rampant late-stage capitalism and insulting to the lower classes who can’t afford a birdhouse for their seventeen new birds and a fifty person ensemble to celebrate their holiday. BANNED AND SENT TO RE-EDUCATION CAMPS TO LEARN HOW TO SUPPORT THE PROLETARIAT.

“Do They Know It’s Christmas?”: Takes an aggressive pro-Western worldview. First, the song was written to raise money for Ethiopians during a famine, yet the song continuously refers to them as “Africans” as if they are all the same thing. Second, the title alone asks if they know it’s Christmas – seeing as how Africa consists of only a small portion of Christians, we shouldn’t assume they know about a foreign holiday, let alone ask them to care about it. Third, the song addresses how there will be no snow this year in Africa – Africa is not especially known for a climate beneficial to snow accumulation, and with temperatures rising globally, none of us will be in the immediate future either. BANNED AND FORCED TO LOOK AT A MAP.

“Little Drummer Boy”: Reinforces gender stereotypes. What, a little girl can’t be a drummer? Some of the best drummers of all time are female! There’s… Meg White, Sheila E, Karen Carpenter! BANNED.

“White Christmas”: Triggering for recovering addicts. Constant references to everything being covered in white powder raises the potential for driving recovering addicts into relapsing, especially given the highly-stressful holiday season when such relapses are already more likely. We should all be more mindful of their journey. I SWEAR IT’S ONLY BAKING SUGAR  OFFICER, BANNED.

“O Holy Night”: Omits Muslims and Jews. Not all religions revere Jesus Christ as a savior, although many consider him an important saint and religious figure, and to announce him as “our dear Savior” precludes our neighbors from appreciating the intended sentiment. BANNED.

“I Saw Mommy Kissing Santa Claus”: Infidelity and kink-shaming. A married woman cheats on her husband with her child in the house, who watches the whole scene. The therapy this child will have to endure in their thirties must have been incredible. How old were you when you realized mommy wasn’t cheating with Santa while daddy was in bed, but Santa Claus was actually daddy in costume? I only learned this last year and have been ashamed ever since. Even then, maybe mommy likes a little roleplay in her sexual life, and that’s none of our business what two consenting adults do in the privacy of their own home. BANNED AND REFERRED TO SANTA CON.

“Jingle Bells”: Dismissive of animal rights. I can’t believe PETA has already made a play on this, its been like a week since they said something to make everyone pay attention to them. The whole family is frolicking and enjoying a winter evening while engaging in animal cruelty by forcing one horse to drag their drunk fat asses all over the countryside through the snow. Animals are friends, not servants! BANNED.

“Rockin’ Around the Christmas Tree”: Not mindful of the deaf and hearing-impaired. The song goes on about the music being the reason for the season (“you get a sentimental feeling when you hear, voices singing, let’s be jolly”). Not to mention, it is dismissive of all of those who live in the town in “Footloose” where rock music is banned. TOO MUCH ROCKIN’, BANNED.

“Holly Jolly Christmas”: Heteronormative. The crutch of the song is you, a male singer, is waiting to kiss “her” under the mistletoe. This type of attitude is dismissive of gay communities around the world. What, is no one in West Hollywood allowed to celebrate the holiday, you homophobes? BANNED.

“We Wish You a Merry Christmas”: Excludes the lactose intolerant. Everyone knows the first first verse (“we wish you a merry Christmas, and a happy New Year!”), but the second verse involves chanting “bring us some sticky pudding,” which excludes those with dairy-sensitive diets. It’s not fair that some of us get a delightful winter treat while others have to race for the basement bathroom in a state of colonic panic. SHOULD HAVE BROUGHT THE LACTAID, BANNED.

“All I Want for Christmas Is You”: Flawless. MAKE IT THE NEW NATIONAL ANTHEM.