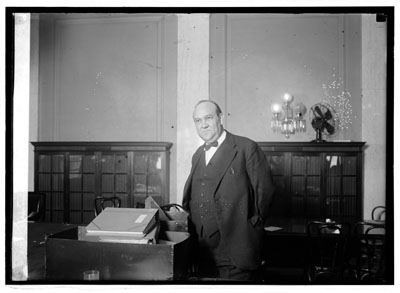 No time to waste today – here is the first three sentences of Gaston Means’ Wikipedia page: “Gaston Bullock Means (July 11, 1879 – December 12, 1938) was an American private detective, salesman, bootlegger, forger, swindler, murder suspect, blackmailer, and con artist. While not involved in the Teapot Dome scandal, Means was associated with other members of the so-called Ohio Gang that gathered around the administration of President Warren G. Harding. Means also tried to pull a con associated with the Lindbergh kidnapping, and died in prison following his criminal conviction.” Roughly ever third word in that paragraph requires much closer examination, and that is what I am here to provide you, dear friends.

Means was born the son of a reputable lawyer and the great-nephew of a Confederate general. He began his career as a teacher and became a traveling salesmen before settling on his profession of choice as confidence man (Confidence Man 2? Oh yeah, I didn’t see the first Confidence Man). Prior to the United States’ entrance into WWI, German politicians enlisted Means to further German interests in the US – this led to him uncovering plots of American espionage, complete with counterplots full of secret documents and dead drops and other standard spycraft (spoiler – this was all entirely fabricated). All these incredible plots required further investigation at $100 a day (roughly $2,500 a day now). The US entered the war against Germany. Means discreetly slid out of his role as “diplomat” and into “private eye”. At one point, J Edgar Hoover once claimed Means was “the most amazing figure in contemporary criminal history” due to his ability to bullshit incredible/fraudulent stories. Foreshadowing!

After this rousing success (you can’t call it a failure, he made BANK off some foreign nationals who weren’t exactly in a situation to recoup their funds), he ended up with the case of Maude King. To summarize King’s situation, she was the widow of a wealthy lumberman who had been swindled out of his estate in Europe, leaving only $100,000 to Maude with the rest earmarked for charity. Seeing one sucker left abandoned by another, Means evolved his role as “private eye” into “personal financial planner” which involved suing for more of the estate, which he won and immediately threw into the stock market. Means lost almost all of the money he had pushed King to claim. Suddenly, a new lead appeared for more funds! These leads required further investigation immediately! The investigation surprisingly resulted in draining King of the rest of her estate. In August 1917, Means and the widow went to a firing range to teach her self defense. According to Means, King got to the range and killed herself using his gun. What unfortunate luck!

A coroner immediately pointed out suicide was out of the question, and Means was put on trial for murdering King. The prosecutors procured evidence showing Means had forged the will using a typewriter manufactured decades after it was alleged to have been written and by pointing out all Means’ “witnesses” were out of town the day it was originally signed. Means was in a bit of pickle. His attorneys – North Carolina locals trying to sell his innocence to a North Carolina jury – whipped up some resentment against the BIG CITY attorneys showing up to pick on a poor old country boy. Means was acquitted after fifteen minutes of deliberation for the murder.

The forgery stuff, well that was still going poorly. A scrambling Means claimed to have a trunk full of German secret documents which the US Army would really like to get its hands on in the midst of the still on-going WWI. He claimed he would deliver the trunk when the judge would attest to his good character and drop the remaining charges. The trunk was uncovered, but Means insisted the trunk be delivered straight away to DC to Army intelligence. Seeing the logic in this, the judge ordered the trunk to DC and dropped the charges against Means.

The trunk was empty upon its arrival in DC, and Means clearly never possessed any secret German intelligence, but Means got out of custody and out of North Carolina for good. Means was a wanted criminal nationwide. Haha just kidding! He was hired by the Bureau of Investigation (the predecessor to the FBI) due to his great investigative skills and his excellent extortion abilities. Almost immediately, Means used his position as a federal agent to solicit bribes for bootleggers during Prohibition, offering to use his connections to get crooks out of tight spots. Means was an excellent example of a clever man who is still too stupid to not be constantly in trouble, and was arrested for his actions. At this point, he confessed to being the scapegoat responsible for handling bribes for senior officials in the White House, and claimed to have the documents to prove his role as innocent bystander sucked into the swamp. When asked for the documents shortly after, Means announced two men had appeared as his home earlier with an order signed by the judge to turn over the documents. This order was immediately identified as a forgery, to which Means responded “Forgery! I’ve been tricked by my enemies! I’ll run them down if it’s the last thing I do!”

Turns out, it was the last thing he would do. He claimed President Harding and Secretary of the Treasury Andrew Mellon were part of a grand cover-up. The DC justice system did not buy the same shit previously pitched to the North Carolinians, and Means was found guilty of perjury and sent to prison for two years. During his prison stint, Means wrote an expose about how President Harding had been murdered by his wife, Florence, due to his extensive criminal dealings and her attempt to protect his reputation. When reputable sources uncovered the criminal aspects of the Harding administration, Means looked to be onto something. It was at this time his ghostwriter stepped forward and announced it was all bullshit, and also claimed Means ripped her off of her share of the profits.

Once he was off the whole “First Lady murdering the President” thing, he claimed to have leads on Soviet secret agents intent on causing massive chaos in America. Means saw the writing on the wall on the impending communist hysteria, and managed to drag out the case of Soviet agents for THREE YEARS, at one point claiming to have captured 24 trunks and 11 suitcases full of secrets orders and plans, only for them to be stolen back again upon his return to New York City. Those rascally Soviet spies! Sensing this particular scam had run its course, he claimed one of his imaginary spies had murdered the other and had all the documents burned – despite being entirely bullshit, an arrest warrant was issued for a murder that never happened. Reading about Gaston Means has provided me tremendous insight on how stupid and gullible everyone was a hundred years ago. Not anymore though, we’re definitely WAY better now.

Does this all seem absolutely insane? A man repeatedly conning the government out of time and money? This was all the shitty pregame show to his spectacular finale – scamming socialites out of money by claiming to be able to recover the kidnapped Lindbergh baby (FYI – I am frequently surprised to learn that people have no idea that American hero Charles Lindbergh had a child who was kidnapped from his home and held for ransom in an event that gripped the nation for months). Evalyn Walsh McLean, a socialite who thought it her American duty to help locate this poor child, approached Means to use his considerable connections to find the whereabouts of the Lindbergh baby. Means asked for $100,000 in exchange for his services as a go-between for the kidnappers, who he claimed to know, and McLean paid him (really think about this – the biggest media circus in history at the time with hundreds of law enforcement officials on the case, and this asshole acts like he knows everyone involved, AND NO ONE PRESSES OR CHALLENGES HIM ON IT AND INSTEAD, THIS LADY JUST GIVES HIM MONEY. This idiot deserve everything that happens after this).

Means immediately disappears, but leaves a confidante to regale McLean with tales of shoot outs and car chases and all the complications of his pursuit of the child. McLean, the dumbest person on the planet, bought this, and continued to front funds for Means to continue his investigation. Again sensing the end of this party, Means lures McLean to an unspecified southern resort and introduces her to “the King of the Kidnappers”. Here, the three of them hatch a plan to return the Baby Lindbergh with a grandiose plan involving code names and secret plans (this dude FUCKING LOVED secret plans). Shockingly, this did not pan out, at which point McLean demanded all her money back. Means feigned disappointment but promised to reimburse McLean for her donations. Of course, when asked again for the money, he responded he was approached by messengers who used her previously identified code name, at which time he forked over the hundreds of thousands he had been originally paid.

McLean may be an idiot, but she was an idiot with a direct line to the police, who arrested Means, who was found guilt and sentenced to fifteen years in prison where he was presumably murdered after trying to say spies had pilfered his bunk mate’s Jell-o for the fourth time in a week.