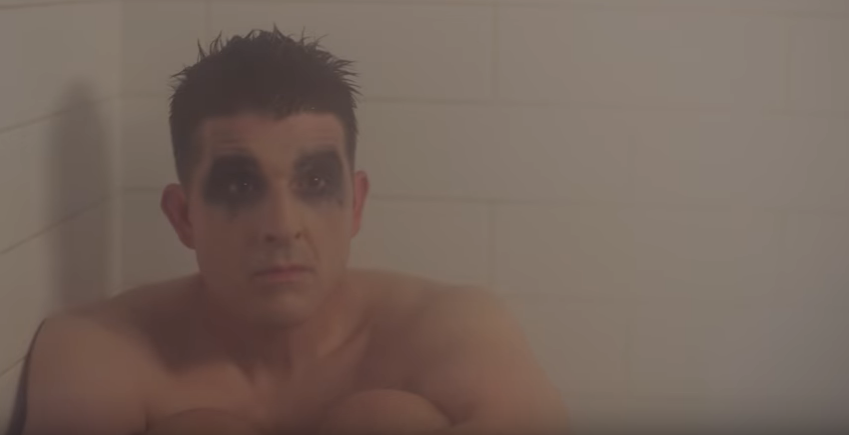 This is an emergency post. Sometimes an event is so life-shattering, so monumental, that you can’t help but urgently move to share it with every person you know. Today, I share with you: “Batman Cries” by Joe Settineri. If that title doesn’t grab you and immediately require 100% of your attention, well… how did you even find this page in the first place?

So this life-nourishing bit of mana appeared in my life as a tweet from someone claiming this was part of a PR promotional email, which normally warrants immediate deletion without further waste of your precious time but they noticed the particularly grabbing headline you saw above.

I am almost certain this is satire. There has to be a nudge-and-wink I’m missing somewhere, because this could not have been approved by multiple serious professionals. I struggle to understand the intended purpose here if it was indeed a sincere song and video, therefore I am electing to go step by step this song that is… something.

0:01: Look at this Stepford-ass neighborhood with its quaint houses and charming light fixtures. It’s nighttime, which goes without saying because the title includes “Batman.” You could say this is redundant, but let’s take nothing for granted. Our protagonist is an inoffensively quasi-handsome man, a kind of a Long Island Tony Romo. He is singing over some somber piano, alone in the middle of the street and on the sidewalk as water runs into a sewer gate. This is called foreshadowing, people!

0:24: Wait a second, our protagonist’s face looks different in this shot.

0:39: EYE PAINT! Joe looks like he is fronting an emo KISS cover band. No one tell Gene Simmons, we don’t want this artistic masterpiece to vanish due to a frivolous copyright infringement claim. We are approximately one-ninth of the way into the video, and I am HOOKED.

0:45: Joe is BELTING out the chorus. This motherfucker is leaning into it, he is giving it everything his high school music teacher taught him – really utilizing that diaphragm to project his emotions as he sings “when he cries, when BAT-MAN- CRIIIIIIIIIIES!” We have hands pumping, gripping dramatically, and arms akimbo as Joe channels his inner Scott Stapp to really convey his emotion. This is the first chorus. There’s still like four minutes. How can Joe keep this energy?!?!

1:20: Joe is now in a foggy shower with his face paint. Now, I don’t typically wear much makeup, but this will lead to running mascara, correct? Is Joe going to show us his impersonation of a sorority girl who went too hard at the Phi Delt kegger? God I hope so.

1:33: It’s raining now. Joe is remarkably dry despite the pouring rain. The logistics aren’t adding up – is he on a sound stage and the rain is behind him for texture/ambiance, or is he under an umbrella? And it doesn’t work as a storytelling aspect either – we still have a long ways to go and it’s already raining. Even in “November Rain” Guns N Roses knew to keep us titillated by withholding the rain until the end of the video. Joe may have blown his load too early.

1:36: The pouty little emo kid pulling his hood over his head is delightful. I will find this gif, and it will be my response to everything in my life going forward. A distant uncle left me his vast fortune? Slouchy Batman. Dog died? Slouchy Batman. Stuck waiting in the rain? You got it – slouchy Batman. Immediately following slouchy Batman, Joe is now wet. The tension has been dissolved. Joe is wet and wearing face paint, all within the first ninety seconds of this video.

1:45: To quote the ephemeral Tobias Funke: “I’m afraid I prematurely shot my wad.” SLOUCHING IN FACE PAINT IN THE SHOWER! Knees tucked in looking forlorn – is it possible to get this tattooed across my chest?

1:50: Face paint shower Joe has his hand on the glass looking down as the water cascades over him. If you have never seen a movie before, this is suggesting our character is distressed or experiencing self-doubt about who he is as a person. Really soak in this for a moment – an adult man is scream-singing about how Batman cries while pantomiming as a KISS tribute band member while acting serious in a shower. If you don’t find this incredible, leave this site immediately and question where you are in your life.

2:00 Second time through the chorus, but this particular moment, Joe (somehow dry again in the rain) leans back to yell his displeasure at any heavenly body who will hear his wails about a comic book character crying.

2:08: Face painted Joe is back in the shower and pounding on the tiling. I have moved from “I need this tattoo” to “I need a triptych of this face painted man tattooed across my body.”

2:25: Not only is this chorus absurdly long, but they repeat it. This song is like 70% “Batman… CRIIIIIIIIIIIIIIIIES,” but at this particular moment, Joe is howling like the Wolfman at the moon after another slaughter he was powerless to prevent.

2:35: DEAD. I am dead. I cease to exist. Face painted Joe strikes a symbolic Jesus pose with arms spread, and crashes face first into a pool. This is a man in face paint. Imitating Jesus. Falling into a pool. Singing about Batman. There is nothing I can say that will be funnier than that Madlibs-ass sentence. They second shot is him floating face-down in the pool. Just astonishing. This is where I am convinced this is satire, because no one in their rational mind could think this would perceived as anything other than bonkers.

2:52: The man sinks in the pool. Hooded face painted Joe curls under sweatshirt in the rain. He falls to his knees in the shower. The bridge comes in. He claws at the light post back as he pulls himself up. He dramatically stumbles to his feet in the middle of the street in the rain as he encourages himself to “come on, stand up” in song. The song builds with strings towards its triumphant crescendo: face painted Joe screaming about Batman crying again in the pouring rain.

The song plays out to the same beats: Joe Wolfman-howling while looking at something vaguely just off-screen, face painted Joe leaning into the rain, arms outstretched as we defeated our foe: Batman’s loneliness.

I did more research on Joe Settineri. He has no Wikipedia page, but does have two albums on Spotify from 2009 and 2014. According to his own site, he is a “go-to singer in Los Angeles” (whatever that means) and quit his job in finance to pursue his singing career. As of 10 pm October 24th, there are 35,729 streams of “Batman Cries” on Spotify. He has one other perfect fine music video (“Hello Goodbye”) posted June 1, 2018 with 909 views; “Batman Cries” has 21,500. His site includes the following about this soon-to-be part of internet lore: “The new video for BATMAN CRIES explores the inner superhero in us all — the strong, inner-spirit that fights for us and keeps us moving, dreaming, and striving. It’s about the eventuality that even our strongest self needs to be reassured, lifted up, and cheered on. It’s about being down – seriously down – with seemingly no way up and finding that inner strength to go forth. When a superhero is down, it tears us apart, but when that superhero is us, it’s a matter of life and death.” Unrelated to the video, but the producer’s name is “Mike Krompass”. That doesn’t impact anything, but I really needed you to hear the last name “Krompass,” which I’m pretty sure was part of Kenneth Parcel’s made-up religion in 30 Rock.

This is 100% real, people. There is nothing but absolute sincerity in every bit of this, and I don’t understand a single bit of it. I set out to get answers about what this was about, and yet I left with more questions. I may not have got what I came for, but I got what I needed.