Sometimes I have the urge to write, but I can’t find something that sounds compelling or interesting at the moment, or I have no desire to do actual research (yes, I do research). Usually, this is because I want to watch TV and don’t want to look at the depressing sinkhole of Twitter. When this strikes, that’s when I turn to compiling a list of something. Today – megafauna! Do you know what megafauna are? They are giant animals, generally ones over 90 pounds. Today they are mostly pretty well-known – elephants, rhinoceros, hippopotamus, whales, bears, bison, moose, etc. We aren’t going to rank them, because this isn’t a Richard Scarry book. We’re going to focus on the extinct ones and exclude dinosaurs, because I’ve grown out of that stage of my life earlier this year, instead let’s investigate prehistoric, now-extinct species of megafauna, because it’s been a while since you felt insignificant.

Moa: Twelve-foot tall flightless bird. Identified as “cursorial”, meaning they just wandered around aimlessly not necessarily in pursuit of food because they had no natural predators on the ground. As we’ll see, there’s a loophole to this statement. Originally wiped out once humans showed up on their island and killed them with dogs, hunted them for meat, and had their nests wiped out by rats (which arrived with humans). Spoiler – this isn’t the last time we’ll see humans stomp one of these creatures out.

Beelzebufo: A large frog, like ten inches. Meh. Really only got included because it’s got a rad list of nicknames: “devil frog” and “frog from hell”. Dramatic namings will be a recurring thread.

Diprotodon: Hippo-sized wallaby from Australia (obviously). Killed by over-hunting from prehistoric humans. Pssh, those prehistoric idiots didn’t even have spears and still managed to eradicate them. Trash.

Paraceratherium: Not a room in a Dr Seuss book, but a twenty foot… thing. Estimates suggest it looked like a hornless rhinoceros with a much longer, stronger neck, with the picture I looked at depicting it like the proto-humans responsible for the xenomorphs from “Prometheus”. That’s probably far too deep a reference since no one saw that movie. Because life is about context – a modern rhino, if large, grows to be six-feet tall, and weighs roughly only one-tenth of a paraceratherium. Guys, these assholes were HUUUUUGE.

Coelodonta: A hairy rhino, but slightly bigger. Whatever.

Megatherium: Twenty-foot tall sloth, which sounds incredible until you realize they were far too large to actually climb trees and really just pulled anything they wanted towards themselves. Allegedly, they would plant their enormous ass on the ground and just pull everything directly into their mouths. The hedonistic Roman Emperor of extinct megafauna (the panda would be the modern designation for this classification).

Dire wolf: Did you think dire wolves were a fictional creature developed by George RR Martin? Because they’re real and awesome. Well, not really. They were the same size as a modern gray wolf. Okay maybe I oversold how awesome they are.

Daeodon: Big ol’ pigs. Fossils suggest they were omnivores with a predilection for dining on animals the size of modern cows (again, BIIIIIIG ol’ pigs). Considered so dominant in their food chain, they ere nicknamed “hell pig” or “terminator pig”, because fuck yeah.

Macrauchenia: Long-necked sloth that looked like a humpless camel. It’s such a shame to be humpless.

Glyptodons: An armadillo the sized of a Volkswagen Beetle. I mean, sure.

Gigantopithecus: A really big ape. So far, paleontologists have only found teeth because its location in Southeast Asia makes it extremely difficult to uncover more fossils due to the heavy jungle canopy, but estimates suggest it being twice as tall as a modern human, like a real life King Kong. Really loses points because it’s one creature we actually have a real life comparison for, even if its fictional and the source of a dumb remake by Peter Jackson.

Macrauchenia: Identified as “long-snouted creatures like llamas” that looked like dick-nosed llamas. I call it how I see it.

Phorusrhacidae: Almost ten-foot tall flightless bird. Why is this ranked higher than the moa? This son of a bitch was carnivorous. MEAT-EATING EMUS.

Megaloceros: Also known as the Irish Elk. With a rack spreading up to twelve-feet across, had a pretty awesome geographic footprint with fossils of close genetic relatives being found in China. The megaloceros was a big fan of “On the Road Again” by Willie Nelson apparently.

Dunkleosteus: Thirty-five foot armored fish with no teeth. A terrifying reminder of why you should never go in the ocean, lest you be gummed to death.

Teratorn Argentavis: South American bird with twenty-four foot wingspan. Let that sink in – 24 FEET. The largest bird alive is a condor, which is not even HALF as big. This was basically a feathery pterodactyl, and a fair justification to ornithophobia. When you stand in the shadow of the wingspan the length of a school bus, you are allowed to be scared of birds.

Bullockornis: An 8 foot 2 inch duck. A bit ho-hum, until we get to the rad as hell nicknames: “demon duck of doom” and “THUNDERDUCK” (emphasis mine). Thunderduck. You guys, thunderduck. He would make the best villain in a Darkwing Duck reboot.

Sarkastodon: Not a sarcastic elephant, but actually a big-ass hyena. Sources classify it as a “hypercarnivore”, or John Candy at an all-you-can-eat buffet in Las Vegas.

Mastodon/Wooly Mammoths: Actually made extincted by humans! Fuck yeah humans, don’t take shit from prehistoric monsters. Also going to be brought back by humans, because fuck yeah humans! (https://bigthink.com/dr-kakus-universe/back-from-extinction-scientists-plan-to-clone-woolly-mammoth) They are actually two different species – the prior lived 15 million years ago (not driven to extinction by human) while the latter lived as recently as 1.2 million years ago. I don’t know how the math works when my religious texts assures me the Earth is only 40,000 years old. Both have the benefit of having an awesome name, but the former has the benefit of being the inspiration for my favorite band. Fuck yeah Mastodon.

Let’s sidebar and discuss the interesting anthropological theory of island dwarfism/gigantism, which is how the size of an animal evolves to match the size of their geographic locale. Animals from small territories or islands tend to be smaller, whereas ones with larger areas grow to be larger. Surprise – this is why everything in Australia is evolutionary-bred to terrorize you.

Sabre-toothed tiger/American tiger/Smilodon: There are actually a dozen different types of these, all of which have a terrible case of overbite. The earliest fossils date back 34 million-ish years ago, while the most recent fossils were dated to 9,000 years ago. A little too close for my anthropological tastes given they sported twelve-inch fangs. The largest modern tiger was measured at 670 pounds, and smilodons, the smallest and most modern, were estimated to be 900 pounds. The cavemen that squared off against these with sharp twigs they found on the ground had tremendous balls.

Haast’s eagle: The story of Hasst’s eagle is the epilogue to the story of the moa mentioned above. Remember when we talked about how the moa had no predators on the ground prior to humans? That was true, but Haast’s eagles literally evolved to utterly destroy the shit of these hopeless idiots. These birds had short wingspans to navigate the jungles of New Zealand (remember when I said I didn’t want to do research? I have done way more than I bargained for), but these dudes BRAWLED. Their remains have been found with moa bones scattered around, so they were sturdy enough to maul the ever-loving shit out of packs of twelve-foot ostriches. Fun fact! Once the natives of New Zealand hunted moas into extinction, these eagles immediately went extinct as well, as they were all about the easy targets. This all happened in the late 1400s. A gentle reminder that your forefathers lived a far more difficult life than you could even imagine.

Titanis walleri: Also known as the “TERROR BIRD”. You know why this particular bird is ranked ahead of the Haast’s eagle, the overachiever of the extinct monster-birds (aside from the fact it’s called the TERROR BIRD)? Because this monstrosity was restricted to the ground and was purely carnivorous. A 350-pound flightless bird that is pissed about looking like a toucan on meth and whatever they gave Bane in “the Dark Knight Rises” is a recipe for disaster.

Paleozoic sea scorpions: BIGGER THAN A HUMAN HOLY SHIT THIS IS MY NIGHTMARE.

Pliosaurs: Latin for “more lizard”, an extinct genus of thalassophonean pliosaurid known from the Kimmeridgian and Tithonian stages (Late Jurassic) of Europe and South America. Who fucking cares about that boring shit – more commonly nicknamed PREDATOR X. San Fernando Valley is so bummed they didn’t name the Arnold Schwarzenegger-themed-action-movie-porno-rip-off of his classic this. A pliosaur was basically a fifty-foot crocodile, with pieces of one discovered mandible coming in to roughly 9.2 feet. A FUCKING NINE FOOT JAW. MOTHER OF GOD. These things were bigger than modern orca whales. Predator X suddenly seems vastly inadequate.

Siamoglae melilutra: GIANT OTTERS. They grew up to 110 pounds, or twice the size of a large modern otter. Everything on this list has been ferocious and world-crushing behemoths, but this is just a pet I want. I will take two. I will flood my second-floor apartment if necessary to accommodate them.

Megalodon: Because Jason Statham demanded it. They grew up to FIFTY-feet long – for context, an average great white is twelve- or fifteen-feet (male and female, respectively). The movie debuting this summer definitely exaggerates the size of these things, but really not by that much! A modern great white can casual chomp off someone’s leg, and they are only roughly a quarter of the size of a megalodon. I don’t know how I can make this more terrifying. Great whites are considered the finest predators on the planet, and they were SHIT compared to these horrors. They had EIGHT-INCH teeth. ROWS AND ROWS of them. A tyrannosaurus rex is widely considered the most fierce animal to ever roam the earth, but that’s only because they were mortified of going into the water and seeing one of these demons. 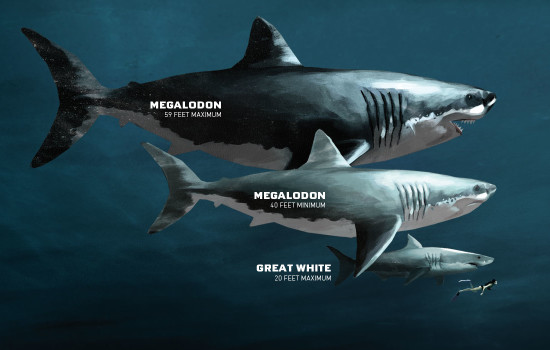 Castoroides: A giant beaver the size of a cow, AKA your mom.