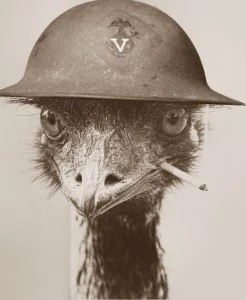 Are you familiar with the concept of “nuisance wildlife management”? It involves the removal of problematic or invasive species from areas where they are not wanted. Before you get all huffy and invoke the wraith of PETA, the idea is to protect humans from the transfer of diseases permitted by wild animals or protecting crops from species that come to thrive after becoming habituated to humanity’s presence. In many instances, the animals are literally removed – their access to the areas are blocked or the animals are trapped and released elsewhere, but in some instances, like in rats in Alberta (which boasts a rat population of zero) or feral pigs in Texas, where they are exterminated in mass. In Australia, emu fall under the latter. In Australia, the concept of “nuisance wildlife management” merged with military operations, leading to the Great Emu War (not to be confused with the Great Emo War of 2005, when My Chemical Romance and Brand New had concerts on the same street in Milwaukee on the same night, leading fans to battle over whose music was “more sincere”).

Post World War 1 (1932, to be exact), people began to settle and farm the previously barren western part of Australia due to advances in farming technology, which was great given the global depression and need for more crops. The issue was emus tend to migrate from place to place in order to find beneficial habitats, and emus LOVED the open spaces and now-massive bounty of crops. Seeing as how subtly is not a trait that traversed from England, the Australians appointed Major GPW Meredith of the Seventh Heavy Battery of the Royal Australian Artillery to eradicate the threat, err, birds. Their weapon of choice: the Lewis gun – a light machine gun manufactured by the British for use in World War 1. Again – to fight some birds.

Almost immediately, the birds proved to be far more beguiling than originally thought. When the force attempted to herd the emus into range for the Lewis guns, the birds scattered and immediately became infinitely more difficult to target. Day 1: Failure.

Day 2: Okay we took a week off and planned ahead here – we’ve established an ambush point, and a local farmer reported more than 1,000 emus were seen moving towards the area. The gunners, giddy with anticipation, waited until the birds cluttered the area, annnnnnd had their guns jam after killing only twelve birds. Day 2 resulted in another discouraging result.

Day 3: The “Minister of the Emu War”, as Major Meredith had come to be called, called for the guns to be fixed to the back of a truck in order to move with the birds. A-ha! A brilliant strategic break-through! Except the birds travel in small flocks, making it hard to kill more than one or two at a time, and are quick to scatter. Now for some “Zoobooks”-esque facts on emus – they can grow to be up to six feet tall and 90 pounds, and can run – sustainable – up to 31 miles per hour. It didn’t take long for the trucks to get outpaced by the birds on unstable terrain, to which the trucks couldn’t drive over or the gunners aim with any accuracy. There was a crash after one bird got caught in the steering wheel. I would love to see the series of events that led to a bird getting caught in a steering wheel. After three separate days, broken up by weeks of planning and re-evaluation of tactics, estimates say 2,500 rounds of ammunition had been fired and only fifty birds had been killed.

Day 4: After massive public backlash due to critical news media over the results, efforts were halted, but within a month, farmers were pleading for any help driving the pests back. This being Australia, and Australians not knowing when to just take this ‘L’ and move forward, returned to the field of battle in hopes of glory. Glory was not to be found: sources note the military “found a degree of success” over the first two days of the second wave, killing roughly forty emus. After a more sustained approach, the Emu Strike Force began to average about one hundred emus a week over the next month. This sounds like a success but consider an estimated 20,000 emus had originally flooded the western farm lands. Like the manager for an outmatched and staggering boxer, the towel was thrown and the mission withdrawn.

After the failed excursion, Major Meredith remarked, “If we had a military division with the bullet-carrying capacity of these birds it would face any army in the world… they can face machine guns with the invulnerability of tanks. They are like Zulus whom even dum dum bullets could not stop.” Not seen: the inevitable research into converting emus in war birds a la raptors in the Jurassic Park reboot. The farmers would formally request help on three more occasions, and instigated a bounty system in order to thin the raging herds, but eventually found the solution for the flightless menace: fences. Seriously. The birds out-maneuvered the Australian military, but were ultimately done in by fences.

One thought on “Arch Stanton Guest Post: Episode 13 in Today I Learned – The Great Emu War”