Hope everything had an enjoyable and relaxing Thanksgiving with friends and loved ones.  It was brought to my attention that I failed to make a blog post about the election.  So here you go: Trump won.  Yes, a huge surprise, I wrote him off during the final 1v1 debates and the Comey letter.  I was wrong, but I was definitely right about this amazing video titled Winter is Trumping (3 minutes long and well worth your time).  Trump won.  Shocker.  We’ll see what comes of all this – I expect he’ll prove much more moderate and presidential than people fear.   Hopes are high that he’ll also move on fiscal policy like a bitch.

Now.  Let’s get into the real “meat” of this thread.

On a hot summer night, would you offer your throat to the wolf with the 12 megapixel camera phone?  (Okay, shout out to Meat Loaf’s You Took The Words Right Out Of My Mouth)  Yes, Carlos Danger is back in the news for lewd photos and texts.  Quick tangent – I was recently at the bank with some people at the drive up window with the tube.  The teller on the camera was pretty cute and it occurred to us that the first dick pic was probably sent in the 1980’s as a Polaroid and sent up the tube to the unsuspecting bank teller.

Okay, have less time than I expected so need to end it here.  Sorry to see Anthony Weiner’s political career is now tainted, emphasis on that last word.  Actually sad about their marriage, too bad Huma couldn’t “stick it out” as well as Carlos.  I highly recommend everyone check out the Anthony Weiner memes on google images but below are some of the better photos: 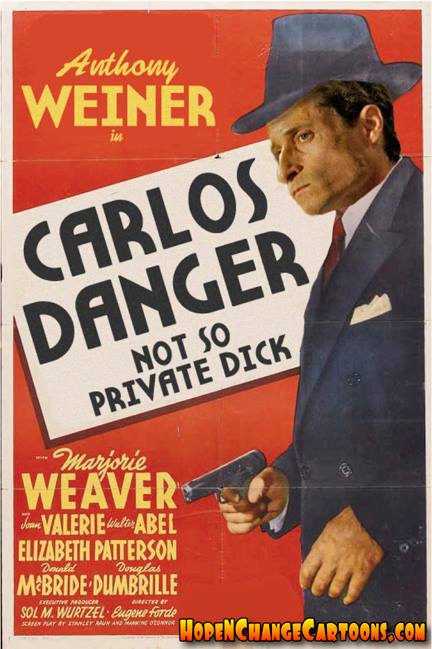 Finally, found the below earlier today and thought it was pretty cool (but was also thoroughly amused):